It is the dream of every young ballplayer to be on the Opening Day roster and stand on the chalklines of a Major League stadium as your name gets announced before a packed house.  While it is immeasurably easier to make the majors as a staff member, the thrill is still there.  Monday was my first Opening Day as a member of a Major League club and while there was much to do, I tried to stop every so often and soak it all in.


The day started like any other, because our game against the Orioles was not until 3:10p.  But it quickly got going.  Our department was holding a Opening Day Partners Pregame Party in our Back Porch area to entertain our valued partners.  At first, we had to set up and that was its own task.  But once things got rolling and the gates opened, I greeted partners as they arrived at the escalator to escort them to the Back Porch.  After the pregame party, it was time to escort the partners to our Left Field Terrace suite to watch the festivities.  It was a long walk, but the partners appreciated the escort.

After successfully escorting partners through the packed Right Field bowl, it was time to fulfill our role as Corporate Partnerships interns: taking photos of sponsor activations as well as assisting in various activations.  I took photos all over Tropicana Field and got into the swing of things for the season to come.  The role we play is not the prettiest but we get to acquaint ourselves with lots of people, see a good portion of games, and interact with and feel more involved with our partnerships.

The 2015 Rays Charity Golf Outing was another success, with partners big and small joining us once again for a day of fun and giving a little back. The whole team was on-site to make sure all partners were taken care of and everything ran smoothly.  My responsibilities for the day were as follows: setting up the flag signage that you see below, helping distribute the swag bags for the partners, and helping run the Hole #8 Speed Hole.  It was a great day really.
Our swag bags were pretty impressive and all the partners were marveling at them.  They included Rays hoodies, Rays performance pullover fleeces, a Taylormade Rays cap, Taylormade hybrid 3-iron clubs, a #raysup head cover, a sleeve of Pro V1 golf balls and a bag tag commemorating the Rays Foundation and the Ritz-Carlton Members Golf Club.  Pretty nice!
Our Speed Hole was great fun.  Rules are simple: if you choose, you can play the Par 4, 375-yd hole in a team best ball format where you try to get the ball in the hole fastest of all foursomes. Only catch is that no one person can strike the ball twice consecutively, so that means you space your team out along the hole, anticipating where the ball will be, have one person tee off, and then you're off to the races.  It was a competitive day at Hole #8 with the winning foursome recording a time of just :31 seconds!  That was accomplished by a perfect, booming drive straight down the fairway, an immaculate approach shot by Rays All-Star third basemen Evan Longoria to within 1.5 feet of the cup and a quick tap-in.  The next closest foursome only came within :09 seconds of that time.
We finished the day 11-12 hours after we started it in the same style as we always do: cleaning, breaking down,and loading cars.  It is a great feeling to make that drive home after a long, successful day.

Every season, the Rays put on an interactive, free fan experience in the preseason to get the vibe and energy up for a new season and new expectations.  This year is no different, as the 2015 FanFest is this Saturday and the stadium and staff are preparing.  I helped with a multitude of aspects, including helping set up our Yard Sale.  Our Yard Sale is an annual event where we sell team-issued merchandise and old apparel with all proceeds going to our Rays Baseball Foundation.  This year, we have TONS of old memorabilia as we not only lost a lot of players in the last couple seasons but also the stadium received vast renovations and old wall art and memorabilia was unearthed.  Pictured you will see the hat display I put together with my vast knowledge and interest in hats, as well as the massive pile/display of David Price Cy Young figurines that I put out.  I did that too--you gotta take pride in the small things.
UPDATE:The role myself and my fellow intern Kim played was of photographer, as well as occasional crowd control and clean-up.  It was a tremendous event and we had a great turn out.  The day began early and was not your typical day in the office.  It was more like a gameday.  We were active from about 8am on and only stopped for quick breaks before 5-5:30.  All reports I have read were very positive with a few gripes here and there.  But you can't please everyone.

The Coaches Clinic is an annual event where hundreds of area coaches come To the Trop to go through some fun little league-level coaching from an expert and with a little help from MLB coaches and players.  As part of the annual initiative, the team provides jerseys and caps for area Tee-ball players from around the gulf coast.  This year that includes 7 counties and as many as 52 leagues.  It totalts some 5800 players.
We as staff have the task of unloading the merchandise, organizing it by league, and then reboxing it to be given to the coaches at the event.
UPDATE: For the events on Saturday and Sunday, we were there as support staff as well as for photographs.  I did not take any pictures, but we did a good job of that.  On top of that was the interaction with the parents and coaches which was very rewarding.  It reinforced for whom we do this: families, kids, parents, etc.  They were all very appreciative and I don't know if I have heard 'thank you' or had my hand shaken more times in such a short period of time for something I did not really do. Loved it. 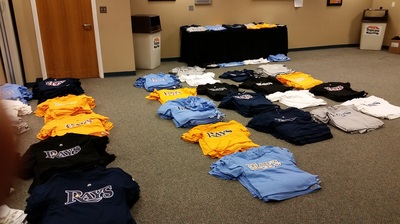 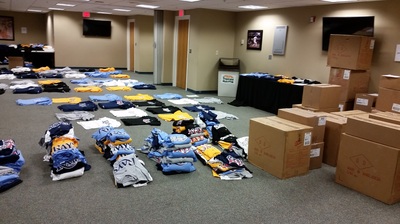